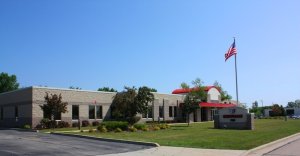 October 29, 2009 - Grunau Co., a mechanical contractor and specialty metals fabricator, was awarded LEED® Gold certification for its remodeled headquarters in Oak Creek, Wis. Grunau has participated, or is
currently participating, in 12 LEED projects in the state of Wisconsin.

"Grunau was the design/build HVAC contractor on Manpower's corporate headquarters building in downtown Milwaukee which achieved LEED Gold status," said Gilbane Project Executive John Gilroy. "It definitely was an advantage to have a design/build contractor like Grunau on the job because they knew all of the parameters and requirements that go into designing and constructing a LEED project."

After going through a remodel at Grunau's headquarters, its personnel decided to pursue LEED-Existing Building (EB) status.

"Going through the LEED process has given us direct experience and a much broader understanding of not only the construction side of LEED buildings, but the operational aspects of LEED-certified projects as well," said Jeff Kuhnke, P.E., project executive for Grunau.
LEED for EB addresses all aspects of building operation from cleaning to energy use monitoring.

As a mechanical services provider, Grunau personnel easily made changes to the building's mechanical systems.

One of Grunau's biggest changes involved its plumbing system. Personnel replaced the bathroom faucet aerators. Instead of using two gallons of water per minute, the new aerators use only a half-gallon per minute. The team also installed dual-flush toilets, which allow the user to alter the amount of water used per flush.

The company reduced the amount of water used for landscaping by 95 percent. The Grunau team implemented a zone watering system for bushes, plants and flowers, and stopped watering the grass.
In addition, the company began purchasing renewable energy from WE Energies. Thirty percent of Grunau's energy usage is offset by renewable sources such as wind farms, photovoltaic sources or gas from landfills or farms.

Grunau personnel conducted a "waste stream audit," to determine the company's greatest type of waste. The audit showed that the company already recycled about 70 percent of its waste.

Grunau expanded its existing recycling program to include fluorescent light bulbs, batteries and old IT equipment.

"We now are in a much stronger position to offer better solutions to our customers who are pursuing LEED certification for both their new building projects as well as in their existing buildings," Kuhnke said.

The LEED certification process is in tune with Grunau's philosophy of Lean construction - business practices that seek to minimize waste and maximize value. The LEED improvements will have less environmental impact and save the company more than $3,500 per year.

Contact us today for more information about Grunau Company