Grunau Metals “won the gold” for outstanding craftsmanship in the 2018 Ernest Wiemann Top Job Competition sponsored by the National Ornamental & Miscellaneous Metals Association (NOMMA).  The Top Job competition is named after NOMMA past president, Ernest Wiemann.  40 companies throughout the U.S. and five other countries competed for an award, within 11 categories and among 99 entries.

Grunau Metals was pleased to receive the GOLD Award in the “Stairs Complete – Commercial” category for their “scary stair” which was fabricated at Grunau Metals’ shop in Oak Creek, WI.  The exterior feature stairs were subsequently installed on the newly constructed “Fortress”.

This building is one component of a multi-building complex that included other structures such as the Library and Classroom within the Epic campus in Verona, WI.  The “scary stair” was strategically placed on the Western-most corner of the complex.  As a result, it provided an impressive overlook to vast acres of Wisconsin farmland. 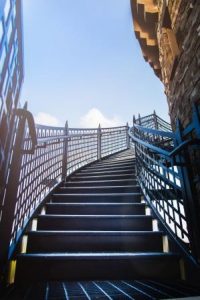 The stair was designed to mimic medieval gothic style wrought iron architecture.  It was attached to the exterior of a castle-like turret complete with crenellated roof parapets.  Key stair features such as spires at the top and bottom of rail posts, material types, and style / orientation of grating treads were determined with care.  The final look incorporated minimal structure for a skeletal appearance, while ensuring engineering calculations would deem the stair to be safe but “scary”.

Because the stair was radiused and cantelivered from a poured concrete foundation wall, building off design drawings was not accurate enough.  An irregularity in the formwork as little as a 1/16” would cause brackets not to align with stair framing.  Therefore, Grunua Metals worked closely with the concrete contractor and obtained lazar scanning of the cured wall after forms were removed.  The data, along with Grunau’s Trimble equipment, was used to project points on the fabrication shop floor.  Grunau Metals even engineered its own steel turret right on the shop floor.  The turret dimensionally matched the concrete version in the field.  After the stair was entirely fabricated, it was dissassembled for welding and galvanizing, then reassembled in sections at the jobsite.  Not one piece required rework for erection.

The scary stair project was celebrated at NOMMA’s 60th anniversary awards dinner in Phoenix, AZ on February 9.  To win an award, entrants submitted photos and a description of the work.  This material was publicly displayed in a gallery where NOMMA member firms then voted.  Winning a Top Job award is most noteworthy, since it represents a “voice of approval” from industry peers.

Grunau Metals is a member of NOMMA, the trade association of the ornamental and miscellaneous metalworking industry.  For a full list of the 2018 Top Job winners, visit NOMMA’s website at: http://www.nomma.org/page/topjob.