Grunau Company receives a spike in emergency services calls around these weather events. With temperatures dipping into negative numbers, underground water begins to freeze. As the water starts to freeze, it expands. Pressure builds inside the pipe, aggravating cracks and exploiting weak spots.  This is known as ‘frost loading.’

In extreme cases, frost loading can cause major main breaks, leaking thousands of gallons of water and inflicting serious damage in the local area.  These breaks are mainly caused by an existing crack that expands from the frost loading pressure.  The milder and more common leaks occur from weak and corroded spots in the pipe.

The extreme cold doesn’t immediately cause pipes to burst.  It can take several days before the 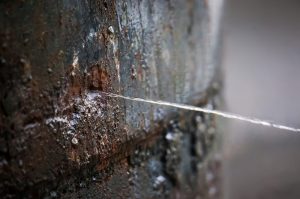 Pipes can burst in cold weather when they are not properly insulated.

weight of the ice and cold causes a break.

“The temperature drops, and then a few days later, the calls start rolling in,” said Tim Sadowske, underground utilities manager at Grunau. “We always brace ourselves after it freezes like that.”

To help prevent main service lines from freezing in the winter, businesses can take a proactive approach.  Insulate any exposed water main or pipe to prevent freezing.  Any water line that is buried less than 3 1/2 feet should also have insulation to protect the pipes from frigid temperatures. If a building goes unoccupied or empty over the winter, owners should drain the pipes and ‘winterize’ the property.

Another way to prevent burst pipes is to properly insulate exterior walls that encase the pipes.  A small hole in an exterior wall can cause major damage to an exposed pipe.  Ensure insulation is placed between the wall and the pipe to avoid freezing.

Grunau offers a unique service to our mechanical systems and fire protection customers with the integrated solution of underground utilities for new installation, remodels, and repairs. We’ve built quality customer relationships with many municipalities to service their underground systems since they can rely on our 24/7 dependability in emergencies.