Prefabrication has proven to be very beneficial in the HVAC and construction industry. At Grunau, we’ve also found many positives to piping prefabrication.

For a current job with MCW, one of our mechanical coordinators developed the skids prefabrication idea. Our Sr engineer then developed the flow diagram for both glycol and chilled water pump skids. 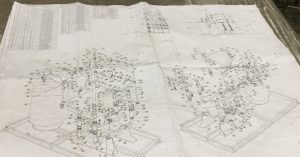 Two Grunau pipefitters installed all of the pipe and components on the prefabrication. The work was completed in our shop within 16 manhours.  In an uncontrolled field environment, it would have taken about twice as long to install everything. 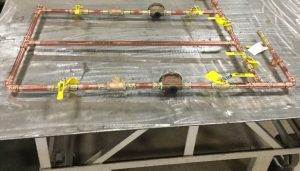 Only two connections from the jobsite pipes to the pump skids were required for the whole system to work.

Since Grunau’s Lean construction culture is all about continuous improvement, when asked what could be further improved, two immediate ideas surfaced. Testing the system, and adding insulation, could be done in the shop prior to moving the assembly to the jobsite.

Piping prefabrication has proven to be a beneficial positive for Grunau. Great job, team, producing a professional looking and efficient product for our customer.