Getting Healthy with the Grunau Cycling Club

The Grunau Cycling Club inspires its members to take action on their own health. The Cycling Club, created in 2017, rides once a week during the summer.  There are a few dozen active members in the club, consisting of Grunau employees, vendors, and customers.  Members of the Cycling Club also participate in official bike rides, including Bike MS: Toyota Best Dam Bike Tour, and the Eppstein Uhen Beyond Design Bike Tour. 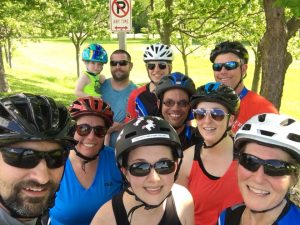 Members of the Grunau Cycling Club

“It is a great opportunity to talk with coworkers and vendors outside of the office setting,” said Lyndsey Eisenhardt, Assistant Project Manager at Grunau. “You learn a lot about people on that hour-long bike ride every week. You connect on a deeper level with no pressure or expectations.  You’re just riding.”

Eisenhardt joined the Cycling Club two years ago after she took charge of her health and was inspired by a fellow coworker to attend a local weight loss clinic.

“I had a lot of success at the clinic, and I saw Lyndsey fighting the same battles I did at the start of my journey,” said Kelly Molitor, Project Assistant at Grunau Company. “I wish I had more support like that during that time, and I wanted her to be successful. The Club is a great way to exercise and socialize.”

Eisenhardt then went on to lose over 80 pounds.  The Cycling Club seemed like a natural next step, though she had to overcome childhood trauma to start riding again.

“When I was a kid, I had a horrible bike accident where I lost my front teeth and broke my arm,” said Eisenhardt. “It was pretty traumatic, so getting back on a bicycle after 20 years was a big step. It felt like enough was enough.  Biking with the Club was this culmination of taking responsibility of my life and conquering my fear. The next year, I did 110 miles in two days.”

Once she overcame that hurdle and started actively riding with the Cycling Club, Eisenhardt feels a stark difference in her daily activities.

“I have a ton more energy.  The extra weight takes a toll on everyday activities- even tying your shoes or walking quicker.  It takes a large mental toll, too,” said Eisenhardt. “Now that I’ve been on this journey, I can feel the difference. I also have a lot more confidence and respect for myself.”

Anyone is welcome to join the Grunau Cycling Club, including Grunau employees, friends, vendors and customers.